Cameras instead of rearview mirrors – is that at all possible? Everything you always wanted to know about the MirrorCam.

Stuttgart – Cameras on the roof frame and displays at the A-pillars: the new Actros is easy to recognise at first glance due to the missing rearview and wide-angle mirrors. The advantages of the new system are obvious – lower consumption due to improved aerodynamics and increased traffic safety thanks to better visibility. But how is it operated, what needs to be considered and do drivers need time to get used to the system?

What changes for drivers?

Thanks to the MirrorCam, the driver now has an unobstructed view where rearview and wide-angle mirrors previously covered large areas to the right and left of the A-pillar. An advantage above all at junctions, when manoeuvring and in tight bends. And, the driver must no longer look as far to the right or left to see traffic to the rear. Also: mirrors are mounted in a fixed position so that when cornering the driver may lose sight of the end of the semitrailer. In contrast, the MirrorCam swivels the image of the camera mounted toward the inside of the bend, so that the driver always has the end of the trailer in view. In principle, the system is set for standard semitrailers, but swivelling can be regulated individually. This happens on modern trailers automatically when they transmit their geometric data to the towing vehicle. The driver can move the swivel radius manually in the door operating unit using the side selection button and the four-way rocker switch.

What are the advantages of the MirrorCam for companies?

The optimised aerodynamics can reduce consumption: the optimised wind resistance thanks to MirrorCam can result in up to 1.5 percent less fuel.

Can dirt and rain have a negative effect on the image?

Misted or dirty mirror glass and side windows have always been a problem. Thanks to the position of the cameras high up on the vehicle, the small roof above the camera lens, a special coating and the digital transmission of the image to a display in the cab, misting and dirt hardly affect the system at all. And what is particularly helpful on cold, damp days; the camera is automatically heated at temperatures below 15 degrees Celsius.

What is the advantage of the distance indicator lines on the display?

The distance indicator lines which are shown on the display of the MirrorCam system help drivers to estimate the distances behind the truck. Three fixed lines are shown together with a line that the driver can adjust precisely to mark the end of the vehicle before starting a journey. Used in combination with the information shown in the displays by the assistance systems, the driver can now better assess three typical situations in particular: when is there sufficient distance to move out to the left? When manoeuvring what is the distance at the rear of the vehicle? After overtaking, when can the driver safely merge to the right again?

Does a camera system present a disadvantage at dusk or at night?

In residual light situations, that is at dusk, the MirrorCam even has an advantage. The light transmission of the cameras is high. Thus the displays show an image that is much brighter than the natural light. So drivers receive better information about their surroundings than with a mirror. Furthermore the brightness is adjusted to the prevailing light conditions steplessly – drivers are not dazzled. All of that works both on the open road and in tunnels. If it is completely dark outside, the MirrorCam can only show the areas illuminated by the vehicle itself – just like a conventional mirror. Here, for maximum image information, the developers have selected a set-up which at present may cause a little image noise.

Can the brightness of the displays be adjusted?

Why are the monitor images not as clear as on my smartphone?

What truck drivers are used to in the way of looking in a mirror is more decisive than the pixel density: with a screen diagonal of 15.2 inches (38.6 centimetres), the MirrorCam corresponds approximately with the previous mirror form. As before the distance and speed of a vehicle to the rear can thus be estimated using size and change in size. However: many modern smartphone displays show a pixel-per-inch ratio that is often beyond the resolution power of the user's eye. Also the device lies in the user's hand, so that the distance to the eye is very small. The MirrorCam displays are considerably further away and the greater the distance, the fewer details the eye can differentiate. Therefore a pixel number similar to that of a smartphone is not at all necessary for the MirrorCam.

Another point: the MirrorCam is a central safety system and therefore designed for reliability. It has successfully completed all of the specified registration procedures. As it stands today, a smartphone would fail.

Incorrectly adjusted mirrors are a potential source of danger. What is the case with the MirrorCam?

For conventional mirrors simple physics applies: "the angle of incidence equals the angle of reflection". This means that whenever drivers change their sitting position, the area that they can see changes too. For the MirrorCam this is fundamentally different. Thanks to the camera/screen combination the driver always sees the same image – in every sitting position. The field of vision can also be set individually using the door operating unit. The advantage of MirrorCam: if drivers shift the field of vision so far that legal stipulations are no longer fulfilled, they are shown a note in the display – which is not the case with mirrors. Pressing and holding the function button quickly returns the MirrorCam to the standard setting.

How well do people who wear glasses cope with the displays and can you wear sunglasses?

Anyone wearing glasses can also easily read the MirrorCam displays. Also because there is no need to look as far to the right and left to see traffic to the rear thanks to the displays being positioned at the A-pillars. However, people wearing glasses may have difficulty getting used to the new angle of vision and distances. In this case the first question should be: are these glasses still correct for these eyes? Changes to our vision advance gradually, initially they often go unnoticed and are accepted. Any problems that people wearing glasses have with the MirrorCam are usually to do with unsuitable glasses rather than with the system. Whether you're at your desk or behind a steering wheel – the same applies: glasses must fit the workplace! Sunglasses aren't usually a problem either. However how much the optical impression changes, depends very much on the quality of the sunglasses. Sunglasses always have advantages and disadvantages – regardless of whether mirrors or the MirrorCam are being used.

Why do some drivers initially find it difficult to reverse in a straight line using the MirrorCam?

The MirrorCam offers two views when manoeuvring backwards: in the standard setting the large main display shows the area directly around the truck and the lower section the further surroundings. This view proves its value particularly when the driver reverses around a bend. However if the driver is reversing in a straight line, it is often better to deactivate this function. This is very simple to do – just use the button in the door operating unit. Thus manoeuvring with MirrorCam offers further possibilities in comparison to mirrors. For this very reason the system takes a little getting used to. Also the cameras are located somewhat further beyond the outer edges of the vehicle than mirrors, whereby more can be seen than with mirrors when reversing the vehicle in a straight line. This too needs time to get used to and initially glancing alternately at both displays. Because when compared with conventional mirror systems, after looking at only one of the MirrorCam displays, some drivers, when reversing, initially feel subjectively that they are driving at an angle although they are driving in a straight line.

How do the MirrorCam and Sideguard Assist work together?

Sideguard Assist supports drivers by drawing their attention to stationary or moving objects and persons in the monitored area to the right of the truck when there is a risk of collision. The MirrorCam display shows these warnings in visual form. Thus drivers receive all information bundled together in one place.

Does MirrorCam still work when the engine is switched off?

When drivers spend their breaks in the cab, they can also activate the camera system for two minutes using a switch by the bed and on the co-driver's side when the engine is switched off and the curtains are drawn. The area surrounding the vehicle is thus in view as well as any suspicious activity involving the truck or its load. The system starts automatically when the door is opened – so that exiting the vehicle is safe at all times.

Prestigious accolade: The new Actros is "International Truck of the Year 2020"

The sustainably improved aerodynamics and safety provided by the introduction of the MirrorCam in the new Actros is one of the reasons why the vehicle won the title "International Truck of the Year 2020". In addition to the increased efficiency and safety, the jury of what is the most important European award for the truck segment also highlighted the progress made in connectivity. New features in the Actros include Active Drive Assist which enables semi-automated driving in all speed ranges, the improved Active Brake Assist 5 emergency brake assistance system, the fully networked Multimedia Cockpit, and the Predictive Powertrain Control intelligent cruise control and transmission management system. The "International Truck of the Year" award is presented annually by Europe's leading commercial vehicle journalists. Mercedes-Benz is the most frequently awarded brand in the history of the competition and has already enjoyed successes with all previous versions of the Actros. 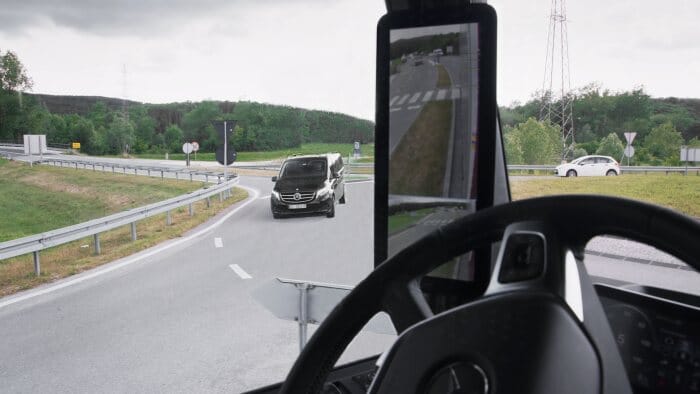 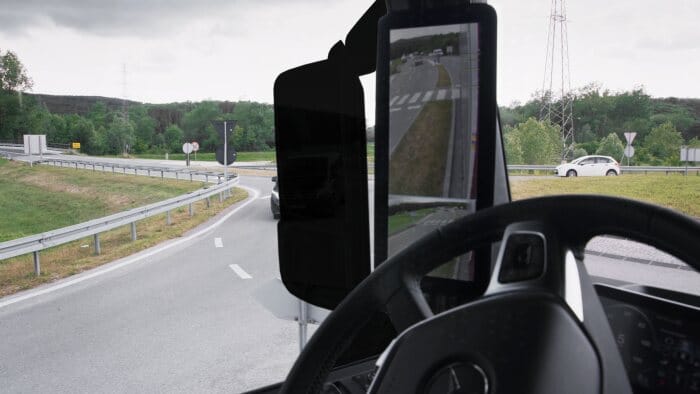 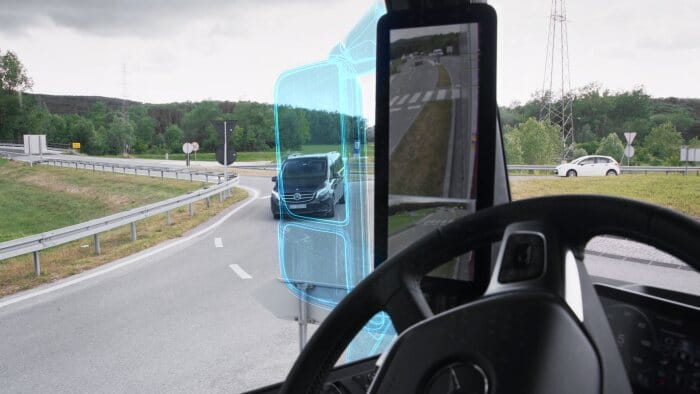